A Lecture/Performance by Randall Packer
Broadcast from the Underground Studio Bunker in Washington, DC
April 7, 2021

This is a stream-of-consciousness journey through time and space, a selection of writings, video, imagery, sound, animation that combines to tell a story of the evolution of multimedia, from the total artwork of Richard Wagner to the present age of telematics. We’re not even sure when the transition took place, because the total trajectory is an evolving world created, a world we enter into, from our desktop and mobile devices… a world that connects us to remote places, a virtual stage, a globally connected community of theatre, the Total Artwork in the Age of Telematics.

We begin our journey with composer Richard Wagner, whose objective in the creation of the Artwork of the Future, was to suspend the audience’s disbelief through the gesamtkunstwerk, the total artwork, the integration of the arts, through the immersive effects of sound, music, stagecraft, poetry, gesture, combined as he said, to “forget the confines of the auditorium… which seems the wide expanse of the whole World.” In 1876, he opened the Festspielhaus theater in Bayreuth, Germany for the premiere of the complete four-opera cycle of Der Ring des Nibelungen (The Ring of the Nibelung): designed as a totalizing sonic experience with ampitheatrical seating surrounded by reflective pillars that reverberated the music throughout the auditorium.

The first television broadcast was by NBC in 1936: signals & transmissions, noise, filters, cathode rays, scan lines: for the first time, the electronic image pulsing through the circulatory system of the television network. This is NBC’s first attempt at actual programming is a 30-minute variety show featuring speeches, dance ensembles, monologues, vocal numbers, and film clips.

Nam June Paik the info-shaman of video, suggested that art should embrace the technologies of the information society to exorcise the demons of a mass-consumer, technology-obsessed society, injecting liberal does of “cybernated shock and catharsis.” Video synthesis provides the environment for movement, reflecting and transforming the image as it travels across the space of the screen.

The fusion of music and dance inserted into video space as a fluid exchange of changing movement, collage, superimposition, indeterminacy… aleatoric interaction between movement, sound, and image that break apart and coalesce, the interdisciplinary synthesis of art and technology, sensors, projections, synthesis, tape, organized and totalized as a musical composition and video collage using the techniques of chance. 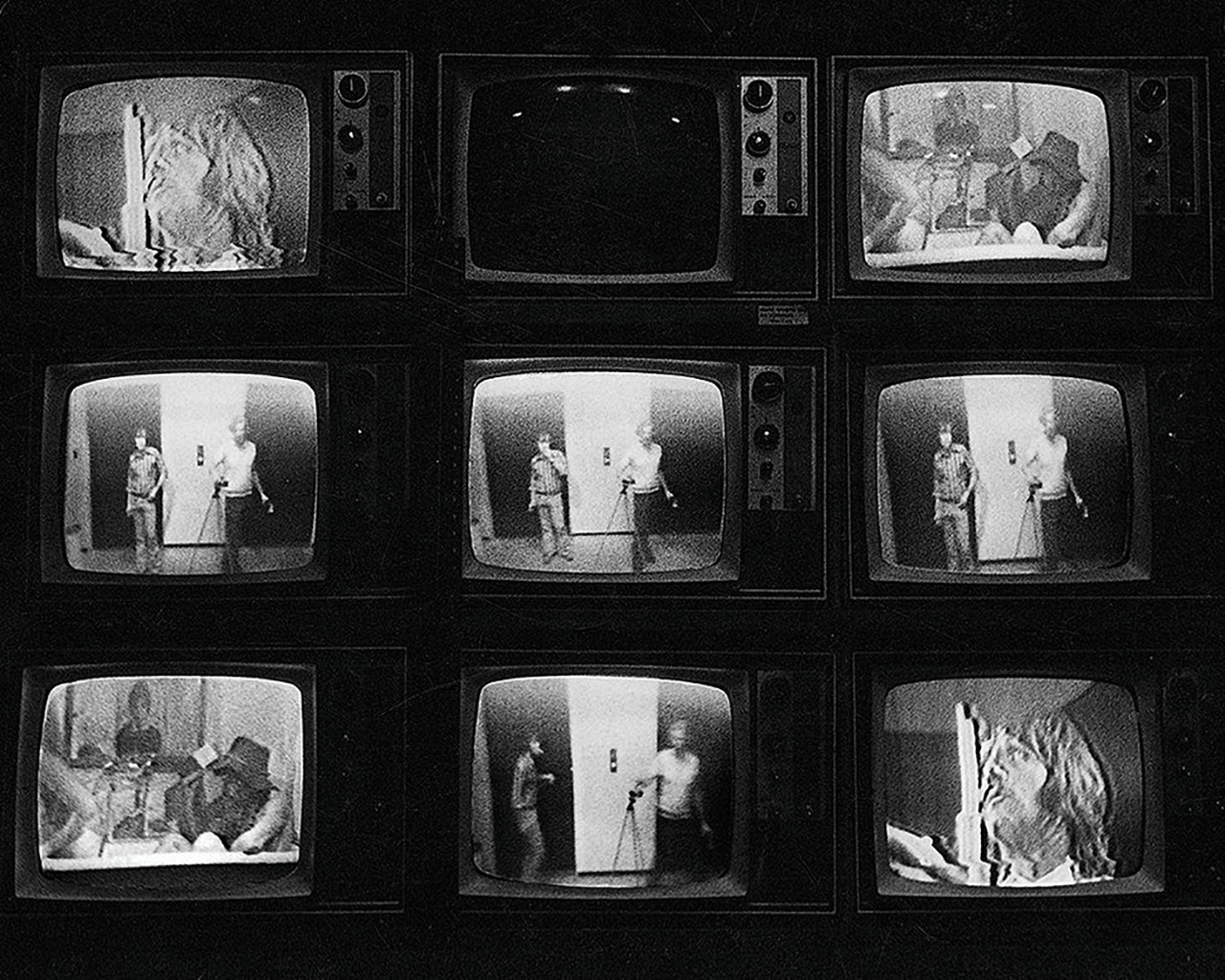 Live video interaction, the viewer in now the performer, performing latencies, delay, signal flow, the flow of media captures the viewer in real-time, cascading through the monitors, a process of ingestion that discursively shifts the viewer through the temporal environment of video space.

We now find connection and theater in the third space, a place that joins the local and the remote into a shared networked space that defies distance and geography. It is the third space, where we now spend vast amounts of time. However, the third space, my term for telematics, in which we are all connected, human and machine in the nervous system of the Internet, has a storied, yet relatively unknown history. Let’s begin…

Joining the US East Coast & West Coast, beaming images & sound off of a NASA satellite feed, producing a magic of echoing latencies and collage, dancers exploring, merging, transluscent, for the first time, a telematic stage of disembodied togetherness.

Puncturing the distances that lie between us, between Los Angeles and New York City, Hole-in-Space was the birth of networked conferencing on steroids, producing high resolution emotional bandwidth, as the artists described, a meta-social-design, a networked installation, inviting the viewer to defy the limitations of space and time, the exalting joy of overcoming the physics of the known world, a new community of theatre, spontaneous, created in the moment by an audience no longer an audience, now agents of interaction.

In Good Morning, Mr. Orwell, 1984 was not the Orwellian 1984 we might have imagined, rather between Paris and New York, a community of theatre took place over the airwaves, imagery from one place was inserted into the other place, in which Marshall McLuhan’s vision of a globally connected world of electronic impulses becomes the total artwork of the network, belonging to Artists who seized the opportunity!

Net Art as Theatre of the Senses

It’s as though French poets Arthur Rimbaud and Antonin Artaud had just time traveled into the future to the early days of Net art experimentation. Two of the seminal projects of the 1990s, Jodi.org and Mark Amerika’s Grammatron, revel in an intoxicated celebration of the senses with a new form of interactive-networked-experiential-transcendental-poetic-theater.

“We are honored to be in somebody’s computer” boast the Jodi authors, who have not only gone beyond the interface, they have abolished it. Jodi pages flash and burn, scrolling and displaying uncontrollable computer code, fragmented shards of interface elements (menus, buttons, etc…), code stripped bare of its functionality, a once symbolic language now transformed into a surreal magic theater of the absurd.

Like William Gibson’s science-fiction novels, including the legendary Neuromancer, the synthetic world of Grammatron, with its de-centered narrative, meandering story-threads, and immersive chaos, confuses and intertwingles real life, virtual sex, and the “search for God.”

Gradually, we are introduced to the tangled web of the Grammatron hypertextual, hypermediated story landscape: Abe Golam, “legendary info-shaman,” Nanoscript, “desire’s own language..a forbidden data that had been permeating the electrosphere,” Golam’s avatar-sweetheart Cynthia Kitchen, the self-alienation of Digital Being, and the quest for creative immortality.

After the initial rush of Web-specific net art, the network was co-mingling and blurring the edges of the space in between the virtual and the physical. The arena of net art leapt off the Web page to be integrated into the installation, the performance, even the cellular space.

We enter the earth, virtually, telematically, data received from the University of California, Berkeley Seismograph, the notorious California Hayward Fault at the edge of Western Civilization: as enter, a live translation of vibrations, pulsations, rumblings, a reminder of the earth’s fragility, and our own memento Mori… a reminder of death, emanating from the activity of deep seismic disturbances, translated in real-time as data flow coursing through the spiraling spatial trajectory towards the center, to the heartbeat of the earth.

From the installation to the opera house, the data becomes the impulse driving the movement of the dancer, the fluctuation of light & sound.

A Telesymphony for 21st century mobile phones, pure cellular cacophony. Instead of being asked to turn off their phones, the audience, lit & mirrored, becomes the orchestra, performing generative mobile sounds dialed in & captured by the composers. The sounds of disruptive chirps, ringtones, and vibrations, those impulses that drive our nervous system each and every day, become a music for our time.

The chatter, chatter, chatter of the Network, the incessant flow of global chat, captured anonymously, revealing everything and nothing about the individuals engaged in collective dialogue that never ceases, 24/7. There is something sadly poignant about these post-human, disembodied utterances of those, attempting to be heard. Is anyone Listening?

Is There Love in the Telematic Embrace?

Are we, as author Sherry Turkle describes, Alone Together? Have we disengaged from the real? Turkle explains how the boundaries between the real and the virtual, the animate and the inanimate are eroding, that “identity on the computer is the sum of our distributed presence.”

Or as Roy Ascott describes in his essay, Is There Love in the Telematic Embrace, “the very technology of tele-communications extends the gaze, transcends the body, amplifies the mind into unpredictable configurations of thought and creativity.”

So we pose the question: in the eroding boundaries between the local and remote, the extension of the gaze beyond the confines of our physical reality, electronic communications as the new artistic content, is there love in the telematic embrace?

Touching, caressing, feeling, hugging, holding: Paul Sermon explores the telematic embrace in its actualization, yes, you can feel it, the body that lies next to you, virtually in the third space, is not an abstraction, it is our reality. It’s where we live, together. It’s where we are alone, together our bodies trying to negotiate and make sense of distance and closeness all at the same time.

Once again, we play out the telematic embrace, the kiss, is the kiss a relic in the aftermath of the Network? Do we need to redefine intimacy? What is intimacy? Have we lost it? Are we rediscovering it? In our distributed third space presence of separation, are we losing the ability to differentiate between what is real and what is not? What is human touch becoming?

The intensity of our social chatter is deafening, here, every utterance is a personal confession that has been downloaded from YouTube, an amorphous, cacophonous symphony that drowns out each and every voice, crying out to be heard, like lost souls in the night. We can try and touch, we attempt to be heard, to tell our story, but can we be heard when everyone is speaking, alone and together, at the same time?

According to Roy Ascott: “The question of content must therefore be addressed to what might be called the Gesamtdatenwerk – the total data work – and to its capacity to engage the intellect, emotions, and sensibility of the observer.” Now we find, the desktop, the interface to our data, is our theater, the mis-en-scene, the arena for play and connection.

But in thinking about the idea of the gesamtdatenwerk, we might also consider the consumption of data, losing ourselves in the data, becoming the data in the space of glitch, artifacts, latencies, noise, and digital debris. On our desktops, we now perform the totalization of our Data.

The Theater of BitTorrent, the disjunct flow of information, pirated and ingested, streaming across our desktops, tiny fragments of media from those participating on the Network, a distributed BitTorrent theater, here captured and processed for analysis, for as long as you can withstand the constancy of this river of noise.

Here is my coda. I leave you with a brief submergence into my world, the underground studio bunker, where I tend to “forget the confines of the studio… which seems the wide expanse of the whole World.”

And finally, at last, it’s time to define multimedia. Here’s my suggestion: don’t overthink it, do it, and be sure to keep it indefinable. Thank you.