Tracing the fertile series of collaborations between arts and sciences throughout the twentieth century, Randall Packer and Ken Jordan present the often overlooked history behind multimedia—the interfaces, links, and interactivity we all take for granted today. “Many of the papers that had profound impact upon my development—to say nothing of the entire industry—are here,” raves Donald A. Norman, author of The Invisible Computer. In “an evocative whirlwind tour through 100 years of work” (Wired), Packer and Jordan bring together an “historically significant” (Slashdot) collection of the groundbreaking visions of scientists like Vannevar Bush, Douglas Englebart, and Norbert Wiener, and artists like John Cage, Nam June Paik, and William Gibson. Their insightful explanations of the core concepts behind multimedia provide historical context that “reads like a Western civ of modern media” (Film/Tape World). 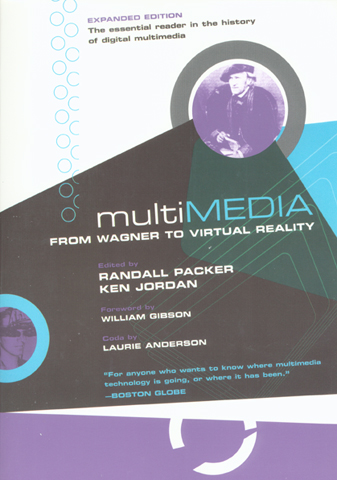 Accolades from colleagues and the press:

Matthew Mirapaul – “In the computer age, “multimedia” usually means the audio and video on a Web page. But for Randall Packer, a composer and artist in Washington, the word has a certain “Ring” to it. NY Times

Douglas Rushkoff – “This book may be the Primary Source for years to come.” author of Coercion, Why We Listen to What They Say

Sara Diamond – “Of great value to novices in the field and to serious theorists and educators.” Director, Banff Center for New Media

Jon Katz – The best guide yet on a subject of central importance to anone interested in the future of media… historically significant. Slashdot

Joy Mountford – “”An evocative whirlwind tour throu 150 years of the work of artists and scientists in the field of computer-human interaction.” Wired Magazine

Annick Bureaud – “Not just another reader but a key source book in the field of art, science and technology history.” Leonard Digital Reviews

Reena Jana – ” “Now that the tech boom of the 1990s has settled down, we can finally look at the concept of multimedia in a context other than it being shiny, sexy, and new. In fact, now might be a more ideal time to examine multimedia’s evolution-an ambitious task that co-editors Randall Packer and Ken Jordan attempt to accomplish in their just-released book, Multimedia: From Wagner to Virtual Reality, which offers up what they call ‘the untold history of the multimedia revolution’…” Rhizome

Matteo Battanti – “Multimedia: From Wagner To Virtual Reality is an historical tour-de-force that discusses everything from the avant-garde to computer science. The book, complimentary to the amazing online exhibition (www.artmuseum.net) is, without any doubt, the best guide ever published on a constantly evolving phenomenon that intersects arts and technology.” Apogeonline (Italian)

Tony Reveaux – Packer and Jordan examine and discuss engineers whose visionary thinking initiated and continues to push the concept of multimedia forward… Ultimately, “Multimedia : From Wagner to Virtual Reality” reads like a Western civ of modern media. Film/Tape World

Mitch Nauffts – It is often said that to understand where we are headed, we need to know where we’ve been. Packer and Jordan have done us all a great service by assembling this detailed, thought-provoking, and at times troubling guide to the history of multimedia — and its implications for our collective future. Philanthropy News Digest

Ken Friedman – One plausible starting point for modern multimedia is the work of composer Richard Wagner and his concept of Gesamtkunstwerk. First published in 1849, Wagner’s essay was a milestone in the conceptual and technical innovation leading to multimedia today. This is where Randall Packer and Ken Jordan begin their fine anthology. Design Research News

2 responses to “Multimedia: From Wagner to Virtual Reality”